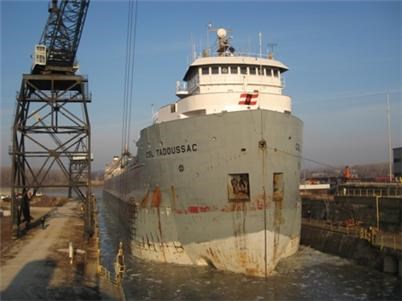 “In 2015 we are excited to continue the momentum from 2014 when we finished the season with a 20 percent increase in overall tonnage,” said Paul Toth, President and CEO of the Toledo-Lucas County Port Authority. “Our shipyard and terminals have experienced a very productive start – we’ve had five consecutive dry dockings at the shipyard and are up 35 percent in tonnage over 2014 with increases in every commodity category.”

“There has been a good mix of marine cargo traffic early on in 2015,” said Joe Cappel, Vice President of Business Development for the Port Authority. “We have seen project cargo, agricultural products, pig iron, steel, aluminum, bulk materials and petroleum products rapidly circulating through the terminals in a fast paced start to the season.”

The Port of Monroe officially opened for business on April 19 with the “Queen of the Lakes,” Interlake Steamship Co.’s Paul R. Tregurtha, making a coal delivery to DTE Energy’s Monroe Powerplant.

“It is only fitting that the first vessel call was that of a record setter, as the Port of Monroe has achieved its greatest tonnage throughput on record for the last two seasons. The 2013 shipping season saw the highest tonnage on record since the Port’s creation in 1932, and 2014 bested that by over 200,000 tons,” said Paul C. LaMarre III, Port Director.

“The 2015 shipping season is shaping up for yet another exponential tonnage increase with a record number of synthetic gypsum cargoes booked for both international and domestic customers,” he added. “Coal, limestone, and liquid asphalt will prove to be steady with another anticipated surge of salt cargoes late in the season. These cargoes coupled with private investment from the port’s cargo handling partner, DRM Terminal Services, will inevitably lead to another record shipping season.”

Over the past two years the Port of Monroe has also seen its most significant dredging in decades. The U.S. Army Corps of Engineers completed their latest activities in recent weeks and contractors have dredged the entire harbor to its charted depth.

The Port of Oswego Authority reports increases in cargo traffic over the same time last year. “Our aluminum shipments are ahead of 2014 when we saw a 30 percent increase,” said Zelko Kirincich, Executive Director and CEO. “To date we have received 11,000 metric tons of aluminum from Sept Iles on McKeil Marine barges headed for the Novelis plant for aluminum sheet production for their automotive clients. We anticipate another robust year, especially as plans move ahead to designate the Port as an official USDA grain inspection/weighing site.” That designation will benefit Port customer Perdue Agribusiness as well as the central New York economy and permit the Port to export the grain via ship to domestic and international customers.

John Loftus, Executive Director of the Detroit/Wayne County Port Authority said that, “Despite the slightly delayed start of the shipping season here in the Great Lakes, we were pleased to bring in eight ships and over 37,000 tons of cargo in the month of April. With five ships already here in May, it’s shaping up to be a busy season.” Cargoes consisted of steel and aluminum for use in the automobile industry sector.

The Cleveland-Cuyahoga County Port Authority has had another strong start to the shipping season. “International tonnage is up significantly due in part to new cargoes such as steel pipe from Europe,” explained David Gutheil, Vice President of Maritime and Logistics. “Spliethoff has added a second vessel to the Cleveland-Europe Express Liner Service which is now bi-weekly versus the monthly shipments we had in 2014, and these shipments have already increased demand in the container market. We expect our numbers to continue in the positive category throughout this year.”

“The pace of shipping is strong. Fednav, Polsteam, and Spliethoff ships have all called on the Port of Milwaukee during the first month of the international shipping season bringing in raw materials and transporting manufactured goods. 2015 is shaping up to be another good year in Milwaukee,” Acting Port Director Paul Vornholt said.