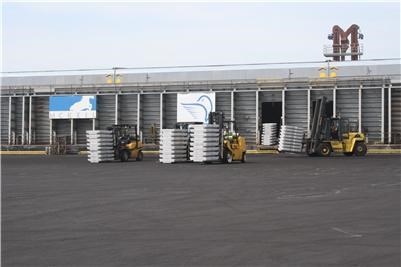 "What's notable about the June tonnage numbers were increases in the export of U.S. grain to Europe and the import of aluminum and steel to the ports of Cleveland, Toledo, Oswego, Detroit, and Burns Harbor. Cargo activity like this is a true reflection of just how hard our port representatives are working to market their operations to current and potential customers worldwide," said Betty Sutton, Administrator of the Saint Lawrence Seaway Development Corporation. "Also notable, is that commodities being moved in containers doubled when compared to the same time frame last year."

Toledo's cargo terminals have been busy through the month of June with total Port tonnage surpassing 3.1 million tons. "That's a significant benchmark for this early in the shipping season putting the 2015 season on par with the success of the 2014 season," said Joe Cappel, Vice President of Business Development for the Toledo-Lucas County Port Authority. General cargo shipments including project cargo, aluminum and steel are up to 17 percent over last year. "We have witnessed increases in the general cargo category every year since 2010. This is evidence that our collective efforts to deliver excellent customer service, improve our facilities and develop new business are paying off." Cappel added, "The port terminals have been busy not just with maritime commerce but also with vessel maintenance and repair work, robust rail to truck trans-loading activity, and new roadway construction projects that are part of our ongoing modernization initiative."

June shipments at the Port of Indiana-Burns Harbor were nearly 13 percent higher than the previous year while the year-to-date total was up seven percent. "The port continues to be a preferred inland hub for large specialty cargoes and the craft brewing industry," said Port Director Rick Heimann. "The increased popularity of craft brewing has brought multiple shipments of European-made beer tanks to the port in the past two years. We have handled over 40 fermentation tanks, generally in excess of 20,000 gallons apiece, for at least three different breweries in Illinois and Michigan.”
The Port of Cleveland launched the Cleveland-Europe Express liner service last year and that strategic investment has paid dividends for the Port. “International tonnage of steel and project cargo has increased 37 percent compared with this time in 2014,” reported Dave Gutheil, Vice President of Maritime and Logistics. “The total volume of shipping container traffic has increased by over 300 percent and we are connecting Greater Cleveland to over 30 countries across four continents now,” added Gutheil. “That is critical for our region to compete in the global economy.”

The Port of Oswego received its second barge of the season carrying another 11,000 metric tons of aluminum on McKeil barges, the bulk going to the local Novelis plant. “We continue to stay on target for another record year in aluminum shipments,” said Zelko Kirincich, Executive Director & CEO.

“The rate commodities are moving through the Port of Milwaukee is near the strong pace set last year,” said Paul Vornholt, Port Director. “We have been busy with steel arriving through the Seaway, and that follows last year’s near-record quantities. Cargo expected to move in the coming weeks will continue that trend.”

The St. Lawrence Seaway reported that year-to-date total cargo shipments for the period April 2 to June 30 were 10.4 million metric tons, down 8.4 percent over the same period in 2014. U.S. grain shipments were up by 17 percent in June over last year. The dry bulk category was up by 7.5 percent over 2014 with stone and potash in the positive column, at 24 and 179 percent respectively. The general cargo category was up nearly 1 percent. Iron ore and coal – usually solid performers – were both down in June by 12 and 33 percent respectively. The liquid bulk category posted a downturn of 7 percent to 957 metric tons.