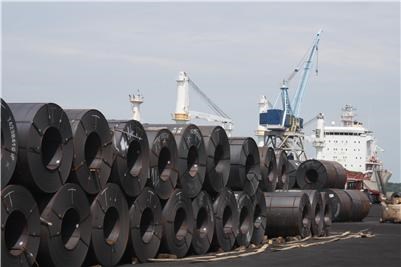 “October was another active month for our hard-working longshoremen handling cargo at the ports in the Great Lakes St. Lawrence Seaway System,” said Administrator Betty Sutton of the U.S. Saint Lawrence Seaway Development Corporation. “There were significant increases in the number of ships arriving in the Seaway System carrying steel, salt, sugar, aluminum and pig iron. With an excellent grain harvest, most of those ships left the System filled with wheat, soybeans, corn and lentils. With two months remaining in the navigation season, we anticipate our longshoremen will continue to be extremely busy.”

The Cleveland-Europe Express continues to prove to be a viable option for shippers moving their goods from the Midwest to markets around the world,” said David S. Gutheil, Vice President of Maritime & Logistics at the Port of Cleveland. “In October, we moved cargo from various points in the Midwest to Belgium, Finland, Germany, Russia, Poland, and the Netherlands, among other destinations, and those shipments included containerized cargo and heavy machinery.”

The Port of Indiana-Burns Harbor is on a record pace this year, having exceeded its previous five-year average for total annual shipments in just three quarters. Officials project a 25 percent increase in 2014, driven by strong shipments of grain, steel, salt and limestone.

“This is the busiest shipping season we have had at this port in more than a decade,” Port Director Rick Heimann said. “Last year this port handled its highest volume of steel cargoes since 2006, and this year’s steel shipments are on pace to double the 2013 total. Much of this is driven by increased throughput by manufacturers in Northwest Indiana and Chicago, but there is also significant new business being generated by metal processors that have expanded facilities or developed new businesses within our port complex. These sizeable investments signify strong confidence in the long-term future of the Midwest economy and Great Lakes shipping.”

“Aluminum shipments at the Port of Oswego are ahead of projections for 2014 and well over the 2013 numbers,” said Zelko Kirincich, Executive Director of the Port of Oswego Authority. “For the month of October, shipments of aluminum ingots rose 145 percent to 13,337 metric tons. “McKeil Marine barges are regularly unloading at the Port. Transits through the Seaway ensure that aluminum from Sept-Iles, Quebec helps keep pace with the upswing in the automotive manufacturing sector.” The Port anticipates another four to six shipments before the shipping season closes in December.

Grain shipping was in full swing at the Port of Toledo as a result of a good harvest in Ohio, Michigan and Indiana. “McKeil Marine barges have been loading grain at ADM in Toledo after they deliver aluminum to Midwest Terminals,” said Joe Cappel, Director of Cargo Development at the Toledo-Lucas County Port Authority. “For us, it’s the perfect scenario when a vessel or barge can discharge and reload without leaving the Port of Toledo.” Toledo’s grain terminals were also busy loading a steady stream of lakers and ocean-going vessels in October, including CSL’s new Trillium Class Baie Comeau, as well as numerous Canfornav and Polsteam vessels. At the general cargo dock operated by Midwest Terminals, a lineup of overseas deliveries included steel coils, wire rod, salt, pig iron, fertilizer and project cargo. Toledo’s coal and iron ore docks operated by CSX are on track to surpass last year’s totals by a wide margin.