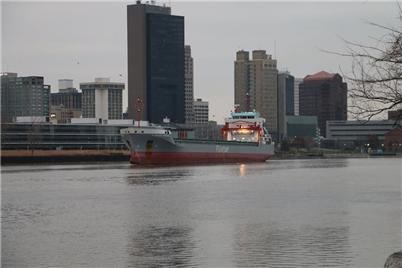 “The story in Milwaukee is steel,” said Paul Vornholt, Port of Milwaukee Acting Director. “November continued a year-long trend that has the Port of Milwaukee logging one of its highest tonnages of steel in recent decades. Among the factors affecting steel volumes are global and regional economic conditions, reliability, efficiency of delivering steel through the Seaway, and cost-effective port operations.”

Shipments at the Port of Indiana-Burns Harbor are projected to exceed last year’s total by over 25 percent, with a steady stream of vessels scheduled through the end of the year. “If this pace continues, the port’s annual shipments could challenge the all-time record set in 1994,” said Jody Peacock, vice president for the Ports of Indiana. “We’re seeing major increases in our highest volume cargoes and steel is leading the way, up more than 100 percent year-to-date versus 2013. Grain and salt shipments are also more than double last year’s total, while limestone and project cargoes are on the rise as well.”

Also in November, the Port of Indiana-Burns Harbor handled an unusual project cargo shipment that included a fuel processing unit and heavy-haul trailer that weighed a combined 885,000 pounds. The large unit was unloaded at the port’s RO-RO (roll-on, roll-off) dock and had to be transported at night with a police escort over a pre-certified highway route to an Ohio refinery.

Despite some weather related delays, positive momentum continued into November at the Port of Toledo. Overseas salt, steel, and pig iron arrived on a parade of Polsteam, Canfornav and Flinter vessels at Midwest Terminals. Some of those vessels traveled just up the Maumee River to re-load Toledo soybeans for direct export. Shipments of corn and soybeans from ADM and The Andersons were also loaded onto lake vessels for export to Canada where some grain was then trans-shipped for overseas destinations. “I believe it’s fair to say that manufacturing has rebounded in the Toledo Region and industry is taking advantage of the Port for direct access to international suppliers of steel and raw materials,” said Joe Cappel, Director of Cargo Development for the Toledo-Lucas County Port Authority. “The combination of a strong demand for steel and aluminum, a good grain harvest and the opening of our new Ironville Terminal have been a recipe for success this season.”

Weather was also a factor at the Port of Oswego Authority in November. “While there were some delays, the Port continues to be on target with aluminum shipments,” said Zelko Kirincich, Port Executive Director and CEO. “We received three shipments of aluminum on McKeil barges totaling 20,228 MT and we expect a peak in December as the season comes to a close.”

“In November, the Detroit/Wayne County Port Authority handled 42,437 tons of material including steel and aluminum, said Executive Director John Loftus. “This is a nearly 7 percent increase over November 2013 and yet another example of southeast Michigan’s industrial growth and sustainability.”